Lammy is a purple lamb.She has an imaginary friend called Mr. Pickels, who is a pickle.

Lammy seems to be a happy, cheerful girly character, as she enjoys playing with dolls and having tea parties. She is also a very sweet character, but her friend, Mr. Pickles, is very violent.

She is often seen at the scenes of dead tree friends but she always insists that Mr. Pickles is the one who did it.

In addition to this, she is often teased for having an imaginary friend. This makes her upset but she still believes in Mr. Pickels, and she seems to be close to him, despite her claims that he is a violent creature.

Lammy is a generally kind and sweet tree friend. Her interests seem to include girly things, but it seems she also enjoys being outdoors.

Despite her claims that Mr. Pickels is a real being It is quite possible that she is mentally ill; Mr. Pickels is just a character in her head and in reality, she is doing everything evil Mr. Pickels does herself, only using him as a shield for her own mind not to think that she caused all the deaths. It is possible that she has schizophrenia, a mental disorder where patients often experience bizarre hallucinations and delusions that no one else sees, thus the reason for Mr. Pickels being a "living" creature.

Some fans dislike her because she kills people much like Flippy, even though Lammy's condition is very different from Flippy's as she does not "flip out".

Lammy is in all dimensions as she is a canon Happy Tree Friends character. 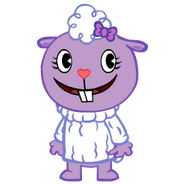 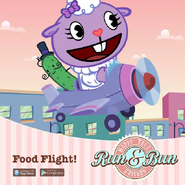 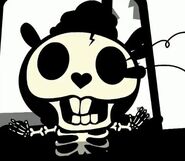 The crack in Lammy's skull may prove that she is mentally unstable.
Add a photo to this gallery
Retrieved from "https://htfdimensions.fandom.com/wiki/Lammy?oldid=5832"
Community content is available under CC-BY-SA unless otherwise noted.